Guerlain recently came out with a few new items for their Terracotta collection. The only item that I previously used from this line were the kohl liners. I first saw the kajal eyeliner in a magazine and had been keeping an eye out for it ever since. I ended up picking up the Kajal eyeliner, all of the fard indien loose mineral shadows and one of the gloss cashmere lip gloss. 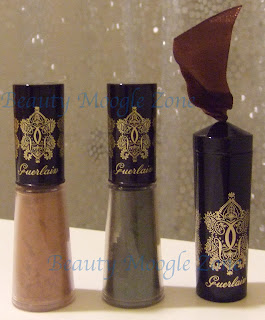 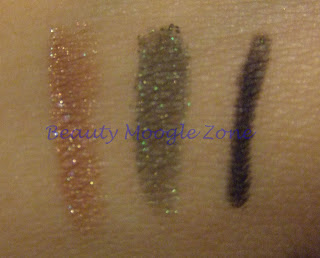 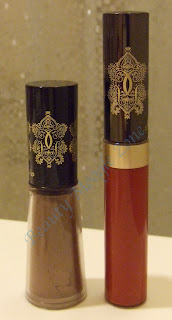 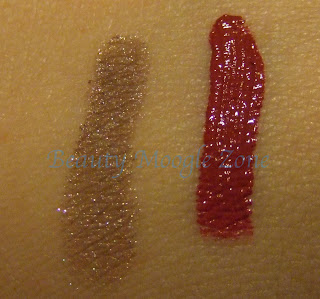 I was very happy with the fard indien loose mineral shadows. I usually dislike loose shadows since they often fall all over my face. These shadows were super smooth and silky and there was little fallout even when using the included sponge applicator. They also applied well with a brush. All of them had a very nice shimmer to them and very easy to blend. They also seem to have a decent staying power although so far I've only used them with UDPP and layered with other shadows.

The gloss cashmere lip gloss was touted as being matte, but gloss at the same time. Seemed to be an oxymoron of sorts but this product does have both qualities. The finish when applied is quite matte and the color is intense, but it's not drying. It does have a very comfortable, velvety feel. I thought I would get one of the more nude-ish colors, however when I tested them out I didn't think they would be very flattering for me so I decided to give the red a try and I ended up liking it very much. It's a warmer brick red, although it's not as orangey as it appears in the swatch. Although since it is so intense in color, I have not worn it out so I can't vouch for it's staying power.

The Kajal eyeliner was the item that first attracted to me to this collection. I'm a sucker for packaging and Guerlain does not disappoint. The mechanism for this liner is very much like a lipstick. The Kajal goes on very smooth and without much tugging. However, when I used this product in my waterline and it was raccoon city. I read that you need to set these types of liner with a bit of loose powder. I have yet to try that. There is also the issue of how to keep the point on this liner since there is no clear way to sharpen it. Some have suggested that it's meant to be used in a sideways manner- the traditional way to use a kajal liner so the natural wear and use should keep the shape.

There is a similar product offered by Styli-Style, a drugstore brand. Their product is called a kajal bullit and I had actually purchased it before the guerlain one. The Syli version is much tinier, albiet much cheaper ($35 vs. ~$7). It's tip is also much sharper so the line created, imho, is much more define. The formula is harder though and I did have to do multiple strokes to get a good dark line. There was a bit of smudging but not as bad as the Guerlain liner.
Posted by Jenn at 11:19 PM

Hii Jenn!! Thanks for the lovely comments! :D So glad to find that you have a blog too, hehe. That Holy Smokes looks gorgeous~

Oo I gotta check out Aveda's some time! Thanks!!

Walgreens rules! OMG imagine if they had a sale in their ad for these mask? Or dare I say a coupon? I think we'd both be making a trip to walgreens. lol

Girl you are so high end! I love the lip glosses!

Wow! Thanks for the review! You def sold me on the Kajal!

yay! take pictures for me! I'm dying to see them!