Revlon Not So Blueberry Scented Polish

During my latest drugstore hopping trip, I've noticed a mess of new Revlon displays. One was advertising their scented nail polish but it was interesting that on the display it said it was Revlon's first scented polish...I was a bit confused since I re-called Revlon releasing a scented polish last year. So I bought Not So Blueberry (to compare to the earlier release by the same name) and Mon Cherry.

I did some stash digging and found my original Not so Blueberry. The 2009 release actually spells it as "Not So Blue-berry" while this year's edition is "Not So Blueberry."

The 2 are a bit different. The 2009 edition is more silvery while 2010 edition has more blue/lavender to it. The scent seems to be about the same. Of the two, I like the 2010 one a bit more since I find the deeper color a bit more flattering for me. 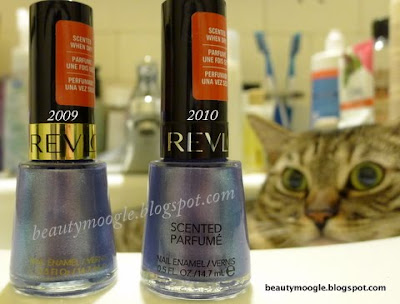 Yes, my kitty was chilling in the sink while I took pics =) 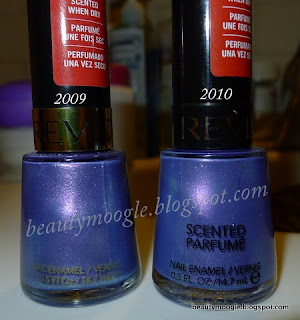 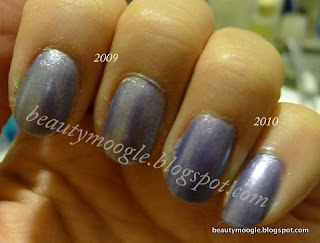 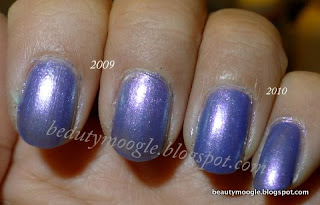 With flash
Turns out there are 16 shades of Scented polish available. The Revlon website is a bit misleading, it looks like you can order online but when you checkout, you get pushed to drugstore.com....which doesn't at the moment seem to have the newer products so check out your local drugstore if you're interested in some scented polish. I got a few of the CustomEyes palettes and Colorburst lip glosses-both which I like a lot so far, more info to come =)
Posted by Jenn at 1:24 AM

but does it smell not like blueberry? Your kitty scares me with his evil look...

Loving your blog! Wow I didn't even know Revlon had scented polishes haha. Is the smell strong enough to give off a light scent or is it more like you have to sniff your nails like a scratch and sniff sticker haha.

I totally did not take advantage of the Hello Kitty sale since a lot of the stuff I wanted was sold out but after seeing your pics I'm definitely going to pick some up when it launches -- everything is adorable!

Well I just subscribed to you! :)

Please check out my blog if you get a chance!

OMG, now I know where to go when I have a question about a swatch!!! Found your site through google and I love it! Thanks for sharing all your beauty love & swatches :)

I also like your profile - loves shiny things and sleep hehe cute!

@ethereal prey It smells like fake blueberries and my kitty doesn't have an evil look on. It's his chillin' in the sink look

@Kelly The scent is pretty strong. It's a bit milder when you add top coat but you can definitely smell it for a few days. Glad you like the pics for the HK items-I'll try to post swatches soon =)

@Irene Thanks for visiting! Love the things you'vs shared on your blog too!

awww, what a cute kitty. reminds me of the "inception cat" video.. hahahaa xD

i wonder if the other scented polishes smell.. well.. nice(ish). not that i need more polish but that blue does look rather nice :D

lol @ kitty in the sink!