I got my Sephora goodies today. It was one of the fastest orders I've gotten from them. I had jumped at the chance to order the new Urban Decay Primer Potion in Sin. I just recently started using the regular potion primer. I was always skeptical of primers and I figure using them would just be adding another step to my make up routine, but lo and behold I am a believer now after testing out the trial sizes provided with the lastest Urban Decay eyeshadow palettes. It helps to bring out the color in many shadows so I don't have to pile a lot on and my eyeshadow stays on much better and doesn't crease (ok, after a looong day there might be a teensy bit of creasing).

The primer in sin is a pink beige champagne color with a nice sheen to it. It would be nice by itself and as a base for other shadows. I dusted some purple shadow over my hand swatch and it became a nice metallic lilac purple color. I will definitely have to play with it a bit more but here is a preliminary pic: 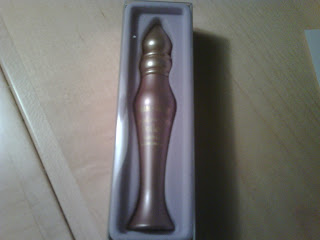 The packaging is a bit different from the other UDPP. Instead of a matte/gloss box. This primer comes in a plastic clear box with a fuzzy purple tray. It's about the length of a ball point pen and I do believe it's the same as the deluxe size of the regular UDPP. I will compare when I get home.
Posted by Jenn at 1:10 PM